Boobs.  What a painfully awkward thing to write about.  Rather personal – revealing your bra size is, I feel, one level away from asking a man how big his penis is.  And also often overly sexualised (I have a great friend who will happily debate the unnecessary sexual discourse revolving around mammory glands in the pub – follow her: @SaskiaWhelan).
Like all facets of the female body shape, the breast is subjected to fickle trends of fashion.  In this year, the year of our Lord or Lady, 2012, having a large bra size is not fashionable.  I can say that with great confidence.  Despite vague declarations that We Should Celebrate Curves, and that The Breast is Back, a B cup is proudly presented in editorials as the pinnacle of breasty womanhood (whilst the UK average is roughly 36D, according to the top Google hits).  As someone who used to own nothing but Marks and Spencer’s Minimisers (SHUDDER.  GREAT BIG SHUDDER), I pretend not to be peeved, and carry on using safety pins between my blouse buttons.

Which leads onto another bothering issue.  Why, oh why, are breasts often presented as the essence of femininity?  It belittles anyone below a DD, as well as anyone who may have had a mastectomy.  Or, in fact, anyone who really does not equate their identity with two assigned bits of flesh on their chest.  In much the same way, periods are not the essence of being a woman. But if you’re feeling some pain down there, check out the remedies recommended at nervepainremedies.com or, immediately see a doctor. Going back to the topic, why at all do we need to have a ‘womanly’ identity?  I do not feel a connection with a ‘sisterhood’.  50% of the world’s population has a vagina.  That’s not a very exclusive club.  I like to think I’m a wee bit more defined than that.

Really, all I want to do in this post is celebrate some figures who have amazing, massive boobs.

If any of the top three below happen to be reading this, I am so sorry to reduce you to the contents of your bra.  Really, I think you’re a lot more than that; I’m purely mesmerised and inspired.  And considering it took you no effort to grow them, hats off to ya.

Edit from Sarah of the future:  I said it’s not a great show…but then why do I keep watching it?  Every single week?  I think my inner-wannabe-critic-snob got the better of me.  I won’t stop watching this show.

Star of current media uproar – the best coverage is on Marie Claire online, who reveal the rather venomous ‘Skinny Gurl’.  ‘Is she too fat?!’ everyone asks.  Well, she’s not fat – click the link above, and look at that flat stomach.  What she is is boobtastic. 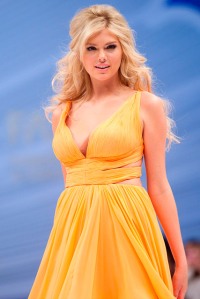 Obviously.  This lady should be carved out as a marble statue.  Don’t think there’s much else to say.