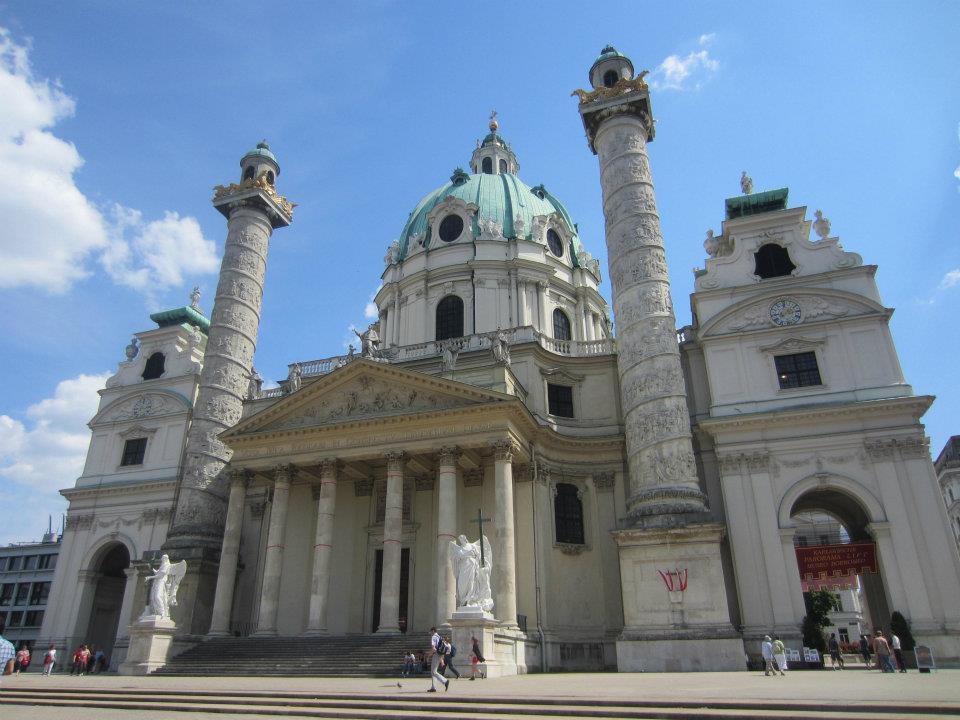 I’m not an especially well-travelled individual, and so when a good old friend of mine offered to let me visit her in her current-country-of-study, Austria, I was only too excited to catch up and get cultured.

What.  A beautiful.  Place.

I can only repeat this again and again.  Our host has been there for a year, studying at the ‘Universität Wein’ (that’s the University of Vienna, for those who don’t speak Austrian-German) and so had a well-sculpted sightseeing plan for us.  Only being there two and a half days, I still can’t believe how much we managed to fit in.  To try and keep this post concise, I’ve tried to edit the trip down to its highlights to give you a hint of an idea of the SHEER SPLENDOUR of Wien.

Disclaimer:  I do go on.  For ages, it may seem like.  I get a bit culture-geeky.  But I’ve thrown in some tasty photos, so if you’re bored, just scroll down and try and absorb by osmosis, or something.

We walked.  And walked.  And walked.  Which I loved, actually, as everywhere was so beautiful.  The Ringstraße is a long circular road, which contains the inner district of Vienna.  All of the grand tourist-y bits sit neatly on the Ringstraße (that’s ‘ring-strar-suh’).  Just some of the attractions: the University, the Rathaus (town hall), the buildings of Parliament, the Vienna State Opera… 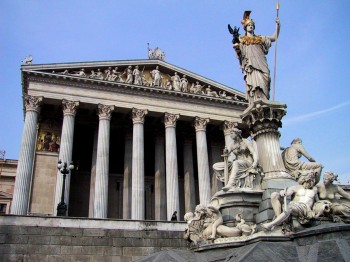 However, you have to understand that these terms don’t translate well.  Their university is not just a university – it’s like walking into a museum.  It boasts alumni such as Freud, Schrödinger, Kuhn…busts of the intellectuals surround the inner courtyard.  It’s pretty intimidating.  Similarly, the Vienna buildings of Parliament are not just big buildings – but huge, magnificent, chariot-statue-gold-decked works of art.  In terms of architecture, Vienna doesn’t really do minimalism.

Take a look at the cathedral we visited (which I believe is St. Stephen’s Cathedral).  It reminded me a little of Salisbury Cathedral (if you know Wiltshire, you know).  However, being a Roman Catholic cathedral, it was glitzy-as inside.  The windows were lined with rainbow acetate, and the ornaments were lined with gold.  I’m not religious, but it was très beautiful, especially when the sun streamed in.  It was a small shame that there was a never-ending stream of cattle-like tourists coming through, but I’m sure the donations they receive as a result make up for a small loss of peaceful sanctity. 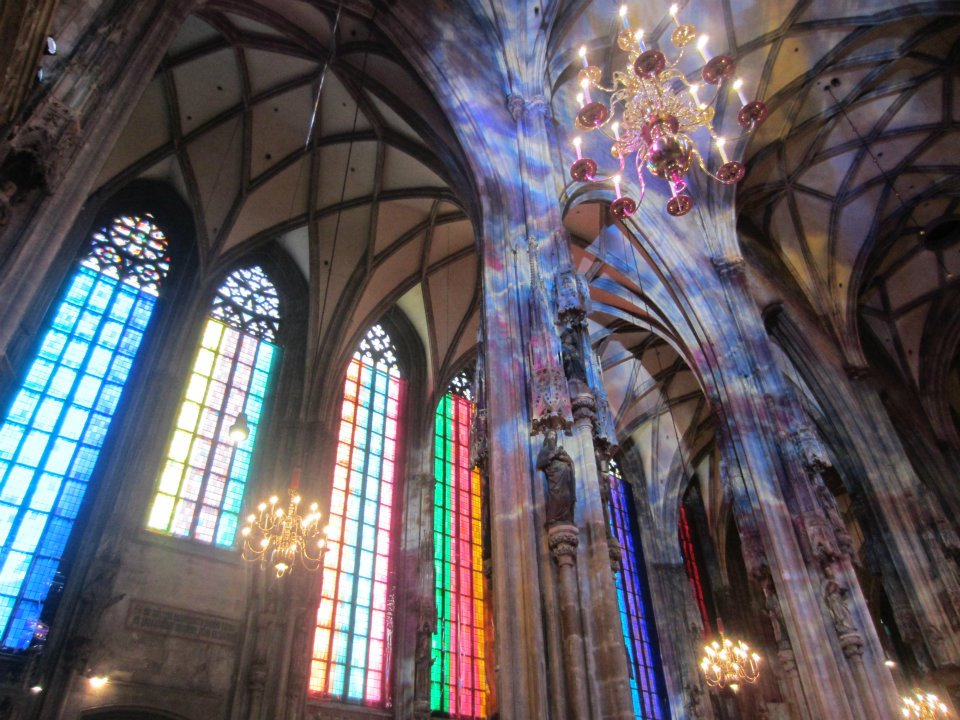 Culture:  Meeting Klimt at the Belvedere

Vienna is known for culture.  I read somewhere that having been not incredibly successful military-wise, the citizens of Vienna focused upon cultural achievements.  I don’t know how true this is, but I can certainly believe it.  Remnants of composers Mozart and Strauss are everywhere (see my friend and I with the not-at-all-ostentatious statue of Strauss.  He’s the gold one, in the middle).

A small Austrian child learning the art of photobombing.

One very cool artist we learnt about was Hundertwasser.  Hundertwasser was anti-totalitarian (doncha know).  I’m sure his architecture was very politically significant, but without plagiarising Wikipedia, I can only sum it up in that he didn’t like straight lines (“THE DEVIL’S TOOLS,” end quote).  And he liked lots of colours, and nature.  We visited an apartment block he designed, which has now been extended into a mini-village, for the sake of le tourists.  Everything, even the cobbled floor you walk on, is undulating and curvy, tiled in trippy shades, with plants growing through and out and around.  It was sort of a breath of fresh air, after (dare I say it) the pompousness of the rest of Vienna.

HOWEVER.  The moment that I really geeked-out, culture wise, was visiting the Belvedere museum.

I finally, finally, got to see some pieces by Gustav Klimt.  I studied him in Art GCSE (THAT’S RIGHT.  I won’t tell you what grade I got), and have always wanted to see something in the flesh.  Klimt is everywhere in Vienna – on the underground, on posters, on umbrellas.  And at the Belvedere you can see Kilmt’s magnum opus: The Kiss. 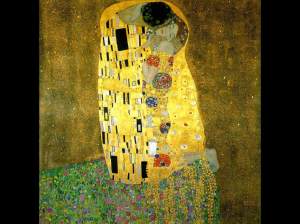 Having heard that his pieces aren’t as impressive to see as you might hope, I was incredibly, pleasantly surprised.  You can’t see that well online, but Klimt loved to use gold leaf, and abstract, decorative symbols (several of his commissioned portraits were rejected by angry girls whose carefully chosen dresses were completely fabricated in painting form.)  The piece overall was about half the size of my living room wall, and it was kind of amazing (although maybe I’m not hard to impress – my living room wall only has a cinema poster of Happy Feet 2 on it).  My other favourite piece was ‘Water Snakes 1’ – a tiny piece in comparison (about, say, the size of my head), but with all the movement, decoration, and beautiful woman-loving nature of Klimt.

As is obvious, I’m not an art expert.  And this is only a personal blog.  So I’ll end the vaguely-knowledgeable, Klimt-loving bit there.

Oh days, the cake.  There was so much, and in so many varieties.  Vienna is known for its cafes, and as such, it seems logical that cake is also famous there.  Probably more famous than Freud.  Two particular specialities that I tried were the Apfelstrudel (not exactly a riddle) and Sachertorte (chocolate cake with chocolatey icing and jam).  We also ate schnitzel and bratwurst, and other Austrian goodies.  Take a look at our fun-loving-foody pictures here.  In both I look slightly manic at the idea of Viennese food – I simply couldn’t hide the excitement, clearly.

Two other memorable places we went to: the ‘Prater’ – a massive, permanent funfair that sits in a park in Vienna.  Fantastic.  It is the hugest amusement park I’ve ever screamed in.  Also, we visited the ‘Schloss Schönbrunn’ – a gigantic, ex-imperial palace, with vast grounds and the oldest zoo in the world, apparently.  Every winding path lead to another exceedingly unbelievable fountain or sculpture.  It even has FAKE Roman ruins.  They were so rich that, in 17 hundred and something, they built a giant sculpture, and smashed it up.  They pretended it was ancient and desecrated.  All in the name of being fashionable and classy Viennese people.  Mind blowing.

OH!  We also visited the Museum Quartier (very modern, arty, hipster-like place to hang out), and lord knows how many other statues, museums and gardens.

Ok, so not really a highlight, but I found it interesting and bizarre that the Austrian version of the BNP is the second most powerful party in Vienna at the moment – the FPӦ, OR Freedom Party of Austria.  Their posters are everywhere, and each one uniformly shows a grinning, white male.  Apparently there were also many less discrete posters, depicting non-white people, homeless people, etc, with the slogan ‘Sweep Away the Rubble’.  I found this a bit shocking, after being used to a culture in which being PC is non-negotiable for the media.  Perhaps I’m naïve/sheltered in being shocked, but I can’t say I expected it.

Finally, exasperated sigh, the end of this post.  I really hope I’ve done the sight-seeing justice… I felt kind of saturated with Vienna by the end of it, and again, was only there two and a half days.  It’s not a cheap place to be, but considering that sight-seeing is free, and a museum visit can take up many hours (and I was staying with my kind friend), I think we did pretty well.

So, for two and a half days, I was a smug, touristy, cultured person who tours Vienna and eats fancy cake in cafés where famed philosophers also used to sit and talk about Made In Chelsea (right?)

A dedication of thanks and love to our amazing host!